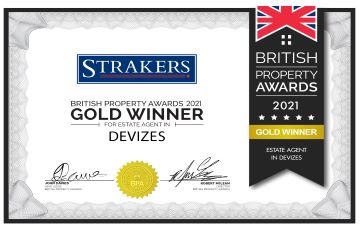 In true Olympic style, we are delighted to announce that Strakers are Gold medal winners, having been judged Best Estate Agent in Devizes by the ‘British Property Awards 2021’.

With the judging panel having conducted a series of mystery shops over the past few months and having initially been shortlisted, we are extremely proud to have been selected; particularly in light of the fact that it has been awarded based on our client interactions and the quality of service to our customers.

The British Property Awards stated ‘Strakers, Devizes have just won The British Property Award for Devizes. Their team performed outstandingly throughout the extensive judging period, which focused on customer service levels. Strakers, Devizes have now been shortlisted for a number of national awards which will be announced later in the year. The British Property Awards provide agents throughout the UK with an invaluable opportunity to compare the service that they provide against the service provided by their local, regional and national competition. Agents who go that extra mile and provide outstanding levels of customer service are rewarded with our accolade, which acts as a beacon to highlight these attributes to their local marketplace.’

Guy Straker, commented ‘a massive well done to the whole team and notably to Joe Baross and Carla Mantle who’s initial dealings went a long way to us securing the accolade. Customer service is at the heart of everything we do and the recognition this award provides is something we are all very proud of.’